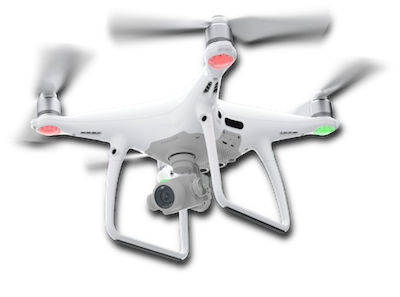 Photogrammetry software is slowly providing an alternative to laser scanning for building plant models. Using ordinary photographs positioned appropriately and with reasonable overlap, software can calculate the position of visible points and create a color point cloud of the result.  Though not yet as precise as traditional laser scans the process can be completed quickly with ordinary cameras hand-held, on boom or on drones.  The result is a low-cost physical model suitable for layout studies.

Here is a flythrough of a full plant model created with drone data (DataWing Global):

Several applications such as this, as well as the equipment and software that creates them, were on exhibit at the recent AUVSI 2017 show in Dallas, TX.

The process is called photogrammetric triangulation or photogrammetry for short.  It calculates the position of objects by comparing their relative position in two or more photographs.  With enough photographs, enough overlap (duplicate points) and enough computing power, the relative position of most of the points can be computed. Add in Ground Control Points (GCPs) and GPS coordinates can achieve a model accurate to as much as 0.001% of flying height (6mm flying at 60 m).  Because point positions are calculated statistically from multiple views rather than directly measured, they are sometimes referred to “correlated” point clouds.

Models have been used to model towns and other sites.  For example a small area of buildings has been modeled by Stephen Zidek (depending on your browser, you may be able to manipulate the image below):

Zidek created a 3D aerial scan of the UMBC campus. 5443 photos were processed through Agisoft Photoscan. The photos were collected via an Arducopter-octo.

Drones are especially attractive, due to their low cost and ability to take pictures at great heights. Software apps can plan flights and snap photos from appropriate positions.  For example, PIX4D has a mobile app called Pix4Dcapture that allows you to create flight plans for capturing image data. See:

Post-flight, you can easily produce georeferenced maps and models in Pix4D desktop or cloud software.

Here is an example where PixP4D was used to model a small storage tank:

Here is another application to plan the scanning of a large building using a package called Drone Deploy:

Using drones, a typical surveyor can complete a plant model for a few thousand dollars.

Drones are not necessary to collect photos for photogrammetry.  Here is a small model made with Autodesk Remake:

And another made with DJI Phantom 3 and Agisoft:

Although more time consuming, a knowledgeable technician can take sufficient photos to create a small model in a single visit.  The key is the software that performs the photogrammetry.

The case study at the link below shows how a photogrammetric drone survey by IATEC Plant Solutions Inc. survey for Petrobras allowed them to determine changes needed to engineering data assets after multiple plant upgrades.

In 2016, a Petrobras gas treatment plant in Brazil found itself stuck between two inspection methods after several plant upgrades. They needed a way to bring their engineering data assets (i.e.: 3D models, drawings, databases) up-to-date, but laser scanning was considered too expensive and direct visual inspection too risky and time-consuming. In search of another alternative, they asked IATEC Plant Solutions Inc. to develop one.

IATEC Plant Solutions Inc. introduced aerial photogrammetric survey via drone and ran a pilot project to prove its efficiency. In only three working days, a DJI Inspire 1 took 2588 images throughout the plant. The drone was automatically driven by Pix4Dcapture flight planning application, collected a total of 2588 nadir and oblique images (nadir taken with grid mission and oblique with free-flight mission) from 10 sub-areas of the facility. In order to determine the best processing option, the images were processed in different software to check for quality, speed, accuracy, flexibility, configurability and usability. Gradually Pix4D emerged as the leader and was used from then on.

The drone photogrammetric survey was used for:

Although still in its infancy, photogrammetry software is providing a new and low cost method generating 3D models from photos from drones and manual photos.  Photogrammetry software seems to pace the development of applications to 3D models.  Models with current technology offer many advantages for tasks ranging from CAD model as-built checks to layout studies and maintenance planning.  As technology improves, it will compete directly with laser scanning in precision and utility.